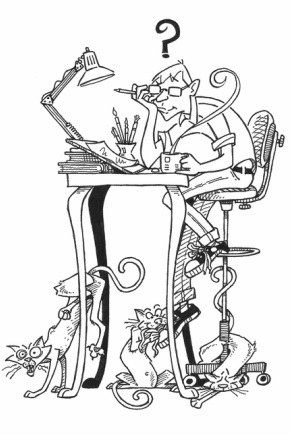 © 2012 Rob Husberg
Raised in the famous seaside art colony of Laguna Beach, CA., Rob Husberg is a multi-faceted artist working in several genres, from the silly to the “serious,” and everything in between. The son of a Gothenburg-born landscape painter and a Glasgow-born actress, Rob grew up as a first generation American in a household of diverse influences.

In Laguna, with the ocean on one side and endless rolling hills covered with towering oaks and eucalyptus on the other, a deep love and respect for nature was instilled in Rob from his earliest years. And this being Southern California in the early sixties—so was his sense of the absurd. Hence, the wide spectrum of his work, continuing through today.

His cartoon oeuvre has covered a gamut of subject matter and mediums, traveling a crazy path through editorial and political newspaper cartoons, magazine “gag” cartoons, humorous book and advertising illustrations, animation design, greeting cards, tee-shirts, posters… the list goes on, and on…

Rob’s European genetics are obvious in his illustration work, which is invariably whimsical, yet intensely lush, atmospheric, and highly decorative. There are almost always cats (and more cats) and many mischievous blackbirds (“Grackles” to be precise, for those wanting to be in the know.) The work teams British and French motifs, and is greatly influenced by art nouveau and gothic architecture—all rendered in a classic “storybook” style.

Rob’s fine art and design work is the result of his great passion for trees (inherited from his father, Allan Husberg, the renowned Redwood painter) and love of water, an inescapable by-product of growing up by the ocean. In this fine art realm, Rob explores the rhythmic patters of line and light in nature, gleaned from a life-long fascination and intense observation.

Rob’s main base is Scottsdale, AZ, where he lives surrounded by cats, and Grackles constantly pecking at his windows.

Honors and Experience:
© 2013 Rob Husberg. All Rights Reserved. All text and images, unless otherwise noted, are the property of Rob Husberg.